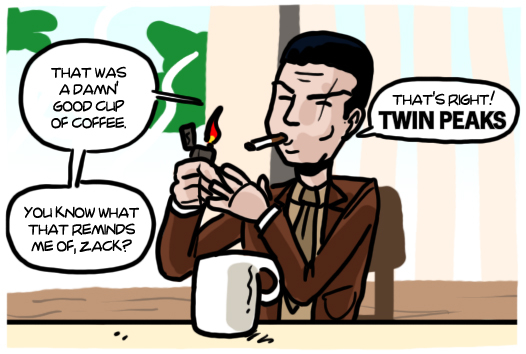 So there’s this game.

Publishers were so unconfident in its appeal, they tried to sell it based on how unappealing it seemed.

The core gameplay is basically copied directly from another game that redefined its genre,

though it also includes its own semi-realistic unique elements, like eating food and using a phone to save.

It comes from the mind of this one Japanese guy,

and takes place in his perception of the United States,

and the whole thing is filled with homages to all of the things he likes.

The story is a goofier retelling of a story that’s been told once before,

and there are a lot of weird people doing stuff that doesn’t make sense all of the time.

But because you spend so much time with them, you start to really care about them,

and as things get more and more earnest, as the end draws closer, the emotional weight of everything has been built up so subtly that you did not expect the sudden urge to cry at the mind-bending climax.

There are more significant parallels, still, but that would mean spoilers for both, and you’re not ready for that yet.

So ever since Earthbound came out on the Wii U’s Virtual Console – which is an incredible concession on Nintendo’s part, but since none of the music in the game has been removed, clearly Nintendo of America’s insistence that the game could not be re-released due to copyrighted song samples was a huuuuge lie – everybody’s jumpin’ back onto the bandwagon that I’ve been carting all on my lonesome.

Amongst all this, though, some good reading has appeared. Not only did Nintendo give Earthbound its own site and sweet promotional video, there’s also a brief essay (no, more like poem) from Itoi himself, reflecting on Earthbound and its purpose.

There’s also more than one interview online with Marcus Lindblom, the man who almost single-handedly localized Earthbound for the West.

These things made me realize that all of my favorite games, to some degree, are like Earthbound; in that they not only make great use of the interactive and long-form nature of the medium, but also are unafraid to include the strange, personal things that other single-minded, artist-driven mediums have been using for many years.

With Earthbound’s re-release, there is a new layer of purpose to my writing. Now that people are actually playing it, we can actually discuss its importance – what it got right, what others have ignored, and who has been paying attention.

It is my belief that SWERY paid attention.

You all clearly have a masochistic streak, so it should be easy for you.

Published on:August 26, 2013 Category: Thoughts
«Holy cow, I just realized something about Metal Gear Solid 2 »So I finally finished Soul Sacrifice (or, The Nature of Memories)