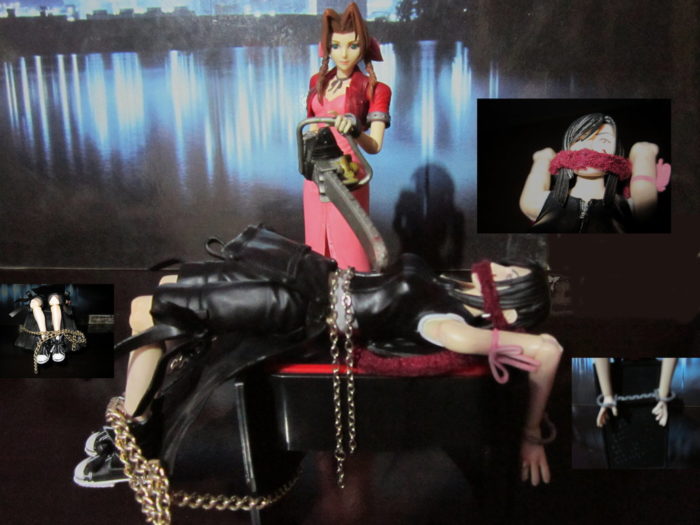 There is one single moment that tells you everything you need to know about Tifa and Aeris, and the kind of people they are.

The calculations that go into deciding who Cloud dates at the Golden Saucer is based on how many invisible “affinity points” a given character has. Based on certain actions and dialogue choices, Tifa, Aeris, Yuffie, or Barret can gain or lose points.

When my wife and I played the game again this past year, we were determined to date Barret. We were successful — with the help of a handy guide. Rather than spoiling the fun, the guide actually provided a lot of funny insight, like how romantic or gruesome particular decisions were interpreted based on the amount of points gained or lost.

But the biggest revelation comes pretty early on in disc one, when you have to infiltrate Don Corneo’s lair.

If Aeris is chosen as Don Corneo’s date, you can say to Tifa:

If Tifa is chosen as Don Corneo’s date, you can say to Aeris:

Aeris and Tifa don’t even know each other yet, but Tifa is still ready to help her, and Aeris doesn’t give a shit.

That even the behind the scenes MATH of the game supports the characterization is fucking INSPIRING to me.

But still, it shows what good characters they both are. They’ve both had tumultuous pasts, but Tifa had the luxury of a stable home life for her formative years. Aeris, meanwhile, has had to run, hide, and mistrust all sorts of authority figures to stay alive and sane. Indeed, it could be seen as admirable that she’s maintained her kindness despite so much trauma, but her somewhat arrested development shows that she was not unscathed. Her penchant for pink, her coyness, her fixation on guys in uniforms, making a living in a busy city selling flowers at 22 (?!) years old… all seem to bely an unwillingness to grow up because, well, her actual childhood sucked! While Cloud lacks a strong identity, Aeris actively manufactures her own. This, ironically, is what allows her do commit her most heroic act, and also her most dangerously naive: sacrifice herself for the sake of the world. Could it be that Aeris simply wasn’t very happy inside?

Tifa, meanwhile, had her most traumatic experience at the cusp of adulthood. Because she has strong ideals ingrained on her by her family and her teacher and her peers, she is able to hold onto them and carry on, even after tremendous loss. This leads her to being somewhat reticent at times, like Cloud, but unlike Cloud, she is also sincere and usually more honest about her feelings.

I love these characters. Not just because the have crazy destinies and origin stories, but, besides all that, they’re fucked up in the tragically banal way that lots of real young adults actually are. And they still carry on and care about each other. 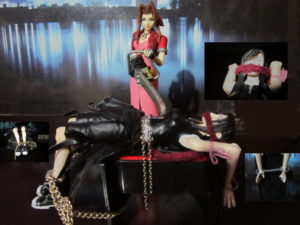 Published on:August 1, 2015 Category: Thoughts No Comments on Tifa and Aeris